An Angband variant set in the Myths of Cthulhu 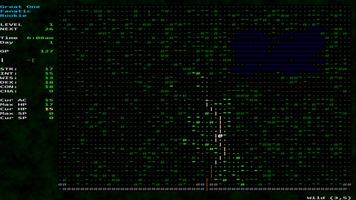 Advertisement
Cthangband is yet another Angband variant, but what makes this version unique is that it's inspired by H.P. Lovecraft's Myths of Cthulhu. This means this version has new races, locations, and a new magic system, all at the same difficultly of a typical roguelike.

This game is set in the Dreamlands, a surreal fantasy world from some of Lovecraft's most popular stories. This world is full of dungeons and monsters, as well as a healthy dose of H.P. Lovecraft's signature cosmic horror.

Cthangband offers players dozens of character options, so many that creating your character can take significantly longer than in similar games. Not only that, but since this game has new races and character classes that are not included in Angband, even roguelike veterans will find something new.

This game has been in development for over twenty years (which is relatively common for roguelike) resulting in loads of carefully designed content. Overall, Cthangband is an excellent variant of one of the best roguelikes in video game history.
Reviewed by Andrés López Translated by Jasmine
Advertisement

Why is this app published on Uptodown?
(More information)

There are opinions about Cthangband yet. Be the first! Comment

Tales of Maj'Eyal
Hundreds of deadly mazes await
Nethack
Can you get Yendor's amulet and escape alive?
Red Rogue
Descend into the depths of the dungeon
DoomRL
The Doom role game is real hell
DiabloRL
And you thought Diablo was difficult? Try this!
CastlevaniaRL
Castlevania goes roguelike
Unreal World
Role-playing and survival in Medieval Finland
Dungeon Crawl Stone Soup
A descent into the depths in search of the Orb of Zot

Arena of Valor (GameLoop)
Play this great MOBA in your PC as well
Rules of Survival 2.0
PURPLE
The official NCSoft emulator for Lineage 2M
Playnite
Merge your game libraries and platforms into a single tool
Retro Arch
One emulator to emulate them all
Play!
The easiest-to-use PlayStation 2 emulator
Xemu
An excellent Xbox emulator for Windows
FCEUX
One of the most comprehensive NES emulators you can find